But the sight of a handsome man in a suit, walking jauntily on a treadmill in the window of a Madison Avenue store has triggered more than a few double-takes. What the—is that a robot?

Andrea Linsky said she stopped in her tracks the first time she saw him.

“He’s so handsome and elegant,” said Ms. Linsky, 53 years old, who works in the Diamond District. “He has this air about him.”

The man on the treadmill is human. His name is Jovan Collins, although he goes by Mister Comfortable when he’s on the clock.

A 32-year-old model and online entrepreneur who lives in Harlem, Mr. Collins spends two hours during the evening commute walking in place, covering the equivalent of 3 miles, or 9,100 steps. He strolls in a snug rectangular nook with a velvet curtain backdrop and view of the sidewalk across from Grand Central Terminal’s north entrance.

“You get the chance to really think, just be alone and go through your day,” Mr. Collins said.

He never looks bored and he’s always on brand, smiling and nodding to passersby while sporting a pair of the men’s dress shoes that his employer, Wolf & Shepherd, is pitching as comfortable enough for long commutes. He wears tailored suits, except on Casual Friday.

He often carries a briefcase, when it is raining he has an umbrella. On the days leading up to Valentine’s Day he toted flowers or a box of chocolates, and now that spring training is in full swing he sometimes wears a Yankees cap.

On a recent Monday evening, people engrossed in their phones or power-walking with their eyes fixed on the pedestrian signal ahead failed to notice Mister Comfortable. Others saw him and glanced back quickly without breaking stride, a small smile or perplexed expression on their faces.

But other people stopped, doubled back, grabbed their friends’ elbows and pointed. Some pulled out their phones for a photo. Ron Tenenbaum, 57, was window shopping with his nose close to the glass when he made eye contact with Mister Comfortable.

“I looked up—I thought it was a mannequin. Then I find out that it is a real person because he smiled at me. I laughed,” said Mr. Tenenbaum, a jewelry manufacturer who lives on Long Island.

Wolf & Shepherd is primarily a direct-to-consumer men’s dress shoe brand that started online in 2015. Hope and Justin Schneider, the company’s married co-founders, decided to open a New York store to attract more customers. They started as a pop-up, with a three-month lease, before signing a one-year extension in January. 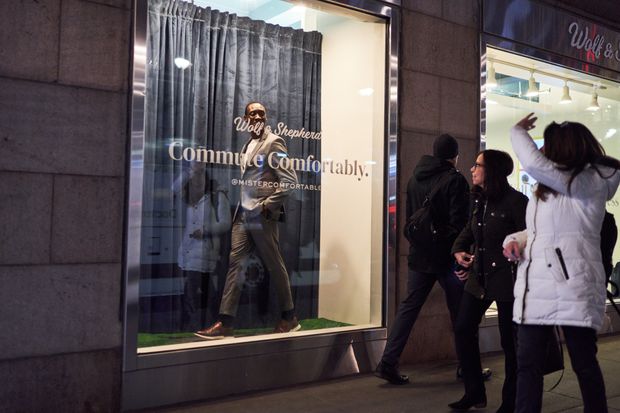 Live mannequins have been used as a marketing technique for decades. Michael Lisicky, a historian and author of a book about the former Brooklyn department store Abraham & Straus, said the store hired female high-school students to work as mannequins in the early 1970s.

“They were stationary on pedestals throughout the store,” Mr. Lisicky said. “They were chosen for their poise and enthusiasm.”

Mark Cohen, director of retail studies at Columbia Business School, said live mannequins and other marketing techniques, like using people to hold signs or hand out fliers, have long been used with limited success. He wasn’t convinced Mister Comfortable would sell many shoes.

Whatever his return-on-investment, Mister Comfortable has become part of many Midtown workers’ commutes since he first hopped on the treadmill in November. Justin Rose, who walks home from his job as a consultant, said he passed by several times before realizing that it was a live mannequin and not a robot.

Rhode Alkhani, 50, said she thought about Mister Comfortable in the elevator as she was leaving her job as an office manager Monday evening.

“I know I’m going to see him. Sometimes I think I’m flirting with him, but it is harmless,” she said. “I just wave, and he waves back and gives me a smile.”

Ms. Linsky sees him several times a day while she’s running errands in the neighborhood and has gone into the store to introduce herself. She said she doesn’t really know him, but feels like they are friends.

“There will be one day when I walk by and he won’t be in the window,” she said. “I know I won’t be the only person who will be like, ‘Wait a minute, what happened, where’d he go? I didn’t get a chance to say goodbye!”

Write to Kate  King at  Kate.King@wsj.com